Get it free today with your Audible 30-day trial!

Sam Haerri, my neighbor and new friend who shares his gardening expertise with me.

(Blogger’s note: I met Samuel Haerri about 10 days or so ago through the introduction of a mutual friend. Sam’s just the kind of guy that tells your intuition he’s a fascinating man. Today, he told me his story.)

“You must have seen the entire world,” I commented an hour into our informal interview as Samuel Haerri recounted the endless miles he’s traveled en route to retirement in Ecuador.

“No, I think maybe just about half the world,” he says before showing me the next photo in his scrapbook. 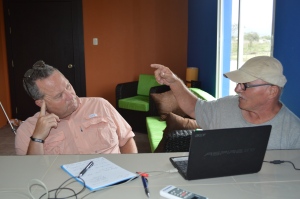 Sam, during our interview this morning, as he recounted the experience of sailing around Africa.

His scrapbook is actually more of an autobiography he’s assembled through the years. He’s titled it, “My Way to the Sea.” And for this Swiss native, the sea was his way to the world.

“From the time I was 10 to 15 years old, the only wish I had was to be away from home,” Sam said, recalling his father’s beatings that came almost daily. “He was a very harsh man, and as a child I did not know what it meant to be on a ship, or that it would be my escape.”

When his 27-year-old mother took her life, Sam was 5. She was so distraught from her husband’s infidelity that she ended her life by drinking the poison used to kill insects in the grape vineyards.

His father remarried, and his relationship with Sam never improved. At 9, he sent Sam to be evaluated at a psychiatric hospital, and the young boy was ultimately placed in a home for children with 80 other residents.

But a year later when his dad lost a leg in a farming accident, Sam was returned home for work.

“He treated me as an employee, and it was never as a son,” Sam said. “If I did anything wrong, or complained, he hit me.” 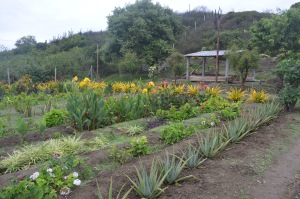 Sam’s gardening skills are impeccable, and this photo is a very small example of his work.

Two years later was the start of a new beginning for Sam. His father purchased a restaurant where the 13 year-old began work, and a waitress there, who frequently saw Sam  literally beaten “black and blue,” told him the story of her son who’d gone into training as a hand on a river ship.

“I asked her if she could get me an interview and help me meet the shipmaster, and she did help me get all the papers in order. When the shipmaster interviewed me, he said I could begin work in three weeks and when I told my father about it I think he was glad to be getting rid of me.’

“I needed thirty dollars for a suitcase and he would not buy one for me. He sent me away with this old chest,” he said, showing me a photo of an old wicker case. “For me, this was a great shame not to have a suitcase.”

At 15, Sam left home for good, completely and entirely on his own. A young man out to conquer the world, he was.

His first three years in training were on a river boat that sailed between Switzerland and Holland, and in 1967 at 18, he boarded his first sea-going vessel bound for the Hudson Bay.

After 15 years of feeling trapped and being beaten, Sam, for the first time, felt alive on the open sea.

“We made our way into the United States and the drinking age was 21, so we could not drink beer as we liked,” he said. “But we had a mess boy who was 21, and I often asked if I could borrow his shore pass. That allowed me to drink all the beer I wanted,” he said, with his wide Swiss grin.

“When we returned to the homeland, my father asked to see me, and we met for lunch one day and he offered me 100 Swiss franks.

“I said, ‘This is a lot of money. What is this for?’ And he said it’s just something I want you to have.

“And I said thank you, but I do not need the money as I now have money of my own. I think he was trying to buy my forgiveness.

“Two weeks later, the shipmaster came to me and asked how old my father was, and I said he was forty. He said, ‘I’m sorry, your father is no longer living. He died.’

“He had killed himself, and I think we was very sorry for the way he had lived. All of my family was crying and I could only feel empty and there was no crying or sadness,” he said.

Sam spent the next 20 years serving as a volunteer in the Swiss military and traveling the world on sea-going cargo ships.

“We would make six-month voyages to China around the horn of Africa during the years the Suez Canal was closed,” he said.  There was Portugal, Angola, Malaysia, Philippines, Brazil, Ecuador, Costa Rica, Panama, Venezuala, Togo, India. The list of countries is almost endless.

In 1975 he was paid a weekly salary “just to be present” on a yacht owned by one of the wealthiest men in Switzerland.

Two years ago, Sam purchased this old fishing boat and converted it into a lounge/bar on his property. The first day we met, he offered me a cold beer at this unique and special venue.

In 2009, Sam retired from the cargo and shipping industry, and he’s now making a home in Ecuador, preparing a new home for his wife who will soon join him when their daughter completes school in Switzerland.

Sam spends 10 hours every day working in his enormous yard and overseeing a private construction crew that’s building his home on an acre of property overlooking the sea.

“I work when I like, and I stop working when I like,” he said. “The retirement is a good life.

“So many people are fearful of the travel, but for me it was the way I learned everything. I was traveling the world alone when I was 18, and I think it is a good way for people to learn and not be fearful.”